About the Village of Kensington

The vision for the “planned colony” that was the forerunner of modern Kensington came from Charles Finlay, President of the Aetna Bank in New York and his partner E.J. Rickert. Read more…

Kensington was established 100 years ago at a time when development on Long Island was just taking off. Our community has taken root and thrived ever since. Although the trees have matured over time, and new ones have been planted, the look and feel of the Village has remained. Whether you are a resident or a visitor, take a tour through our website and see for yourselves what a wonderful neighborhood we have. Contact us if you have questions and enjoy your visit!

The Village of Kensington, NY

Over the years the giraffe has become known as the mascot for the town because of its location in Great Neck as well as the Giraffe connotations for having "a great long neck". 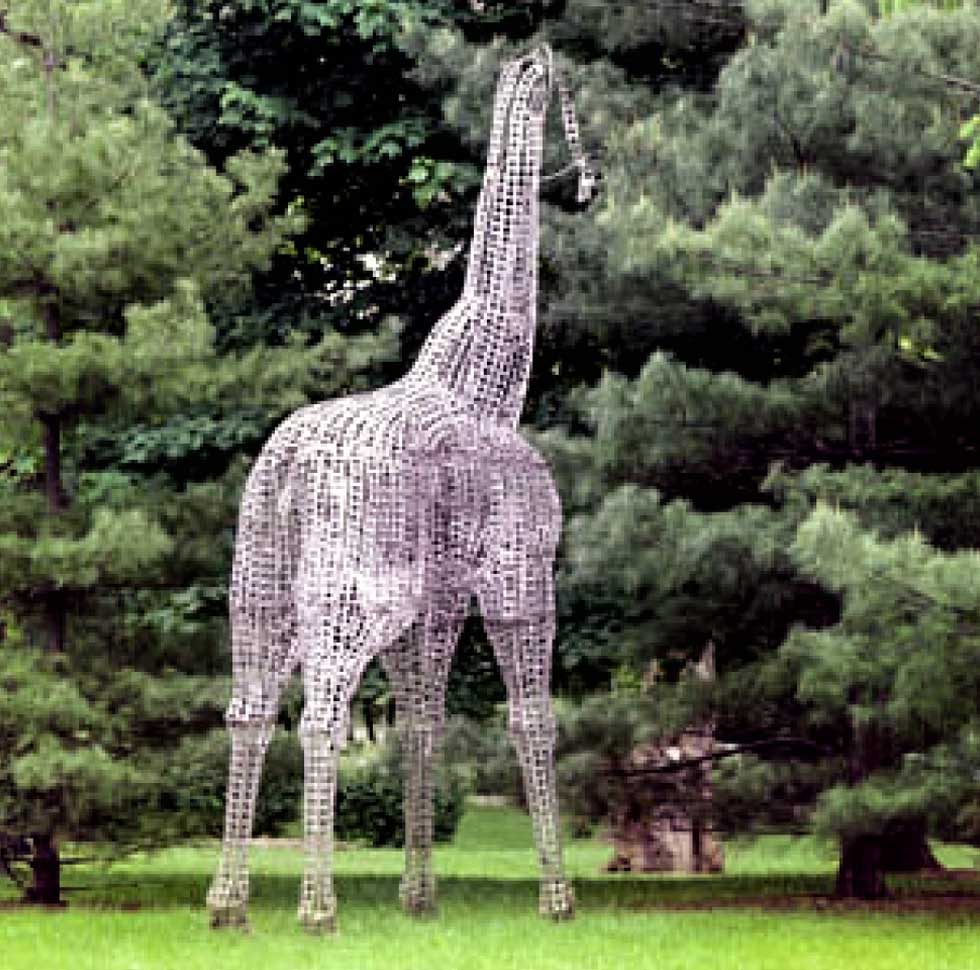 The Kensington Giraffe is located on the village green right across from Middle Neck Road.

The Giraffe sculpture was designed by and built by Nat Epstein, a resident of Great Neck. Mr. Epstein, an amateur sculpture who has had some of his work displayed at the Chiam Weizman Institute and Temple Beth El Synagogue, was a long time Great Neck resident until his retirement to Florida in 1969.

Unfortunately Mr. Epstein passed away in 1976 before his statue found a home. He had wanted his work to be displayed in a public place.

Mayor Cohen and the board of trustees welcomed the Giraffe to the village green in November 1980, where it has remained since.

On November 7, 1921, by a unanimous vote of the
residents, Kensington became an incorporated village. 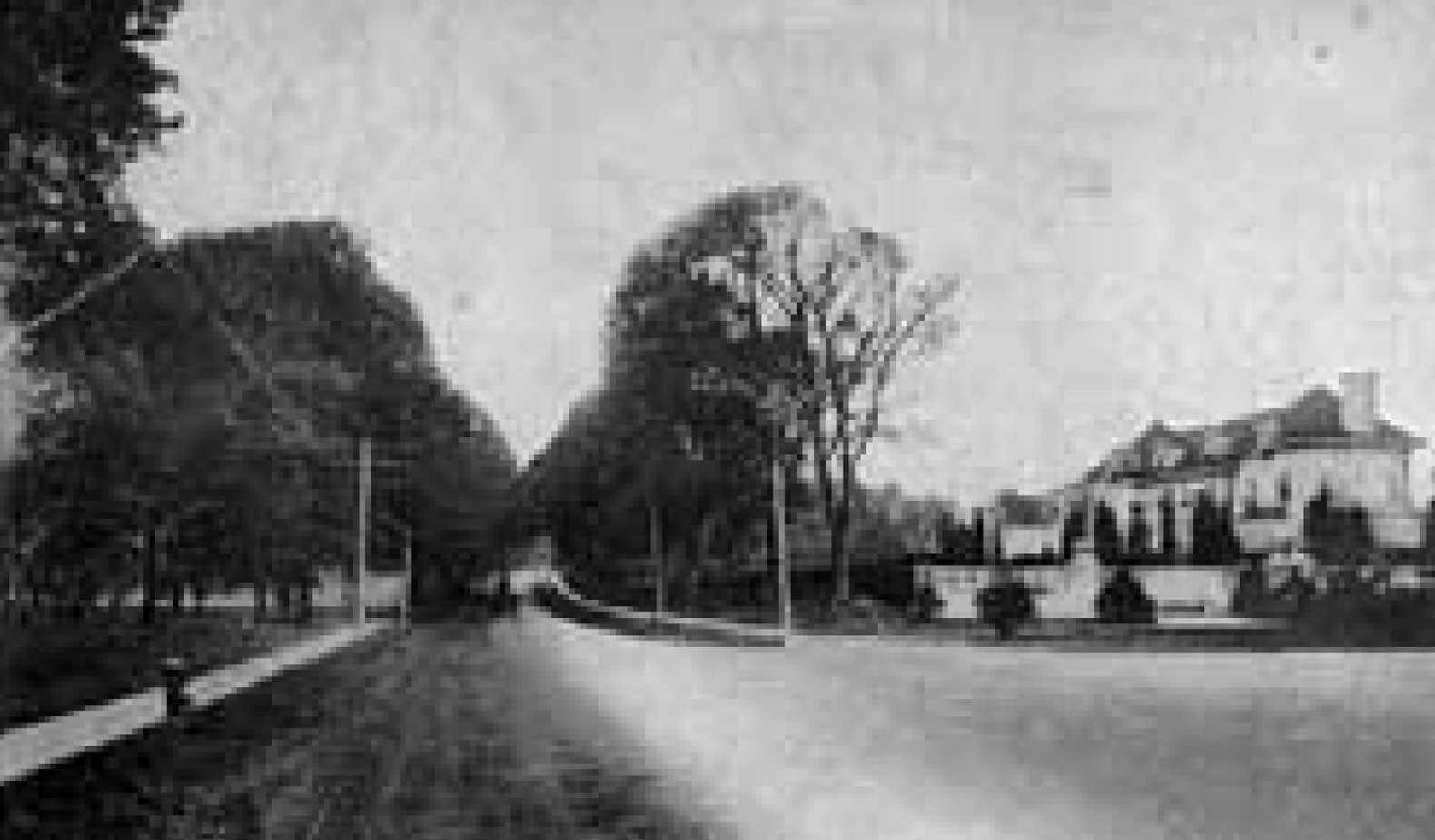 For Rickert and Finlay, luxurious homes set down among nature’s gifts, close to the railroad station, and bordered by Manhasset Bay on the east and the main road on the west, was a sure thing. In February 1909, The Kensington Association was formed, with objectives to preserve, maintain, and improve the Village, to include roads, landscaping, utilities, pool facilities and walkways.

The area around Middle Neck Road, which at the time was a pleasant tree-lined street devoid of any commercial development, is made up of a gridiron pattern of streets where rows of trees were planted to mark streets and property lines. Beverly Road became a continuous archway of lindens and elms, many of which were saplings in the 1800’s. Eleven and a half miles of hedges, five miles of roadways, and eleven miles of sidewalks were put in. A covenant was written to keep business and industry out. A membership corporation was initiated to take care of maintenance and police protection.

The vision for the “planned colony” that was the forerunner of modern Kensington came from Charles Finlay, President of the Aetna Bank in New York and his partner E.J. Rickert.

What Rickert and Finlay saw in the early 1900’s was the Deering Farm encompassing a good part of the land east of what was once called Middle Road, the main peninsula thoroughfare. It had formerly been part of the large land holdings of the Allens, original settlers who gave their name to Allenwood. This, together with the Thorne farmland (Mrs. Allen was a Thorne) bought directly from the native Americans, lying on the west side of Middle Road, formed a collar on the neck of land, now the geographic entity of Great Neck. Harpur’s Lane, which would become Beverly Road, bisected the land from Middle Road to East Shore Road, and an apple orchard filled the quarter of the farmland to the north. 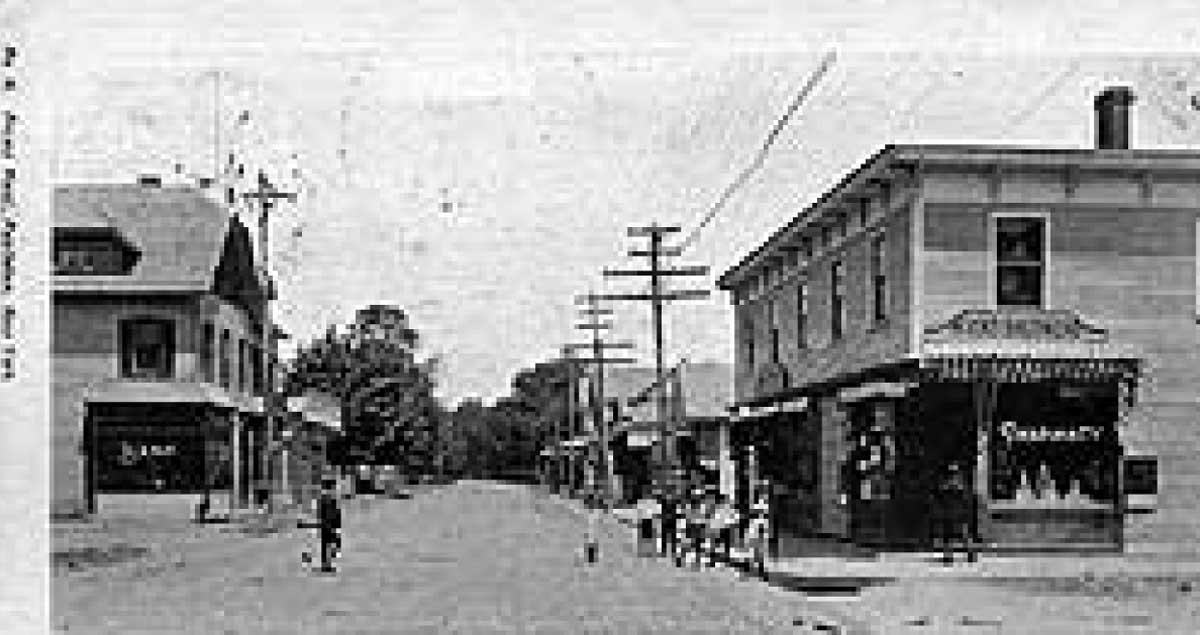 Rickert and Finlay built white gates copied from London’s Kensington Gardens, and then named their village after the gates. 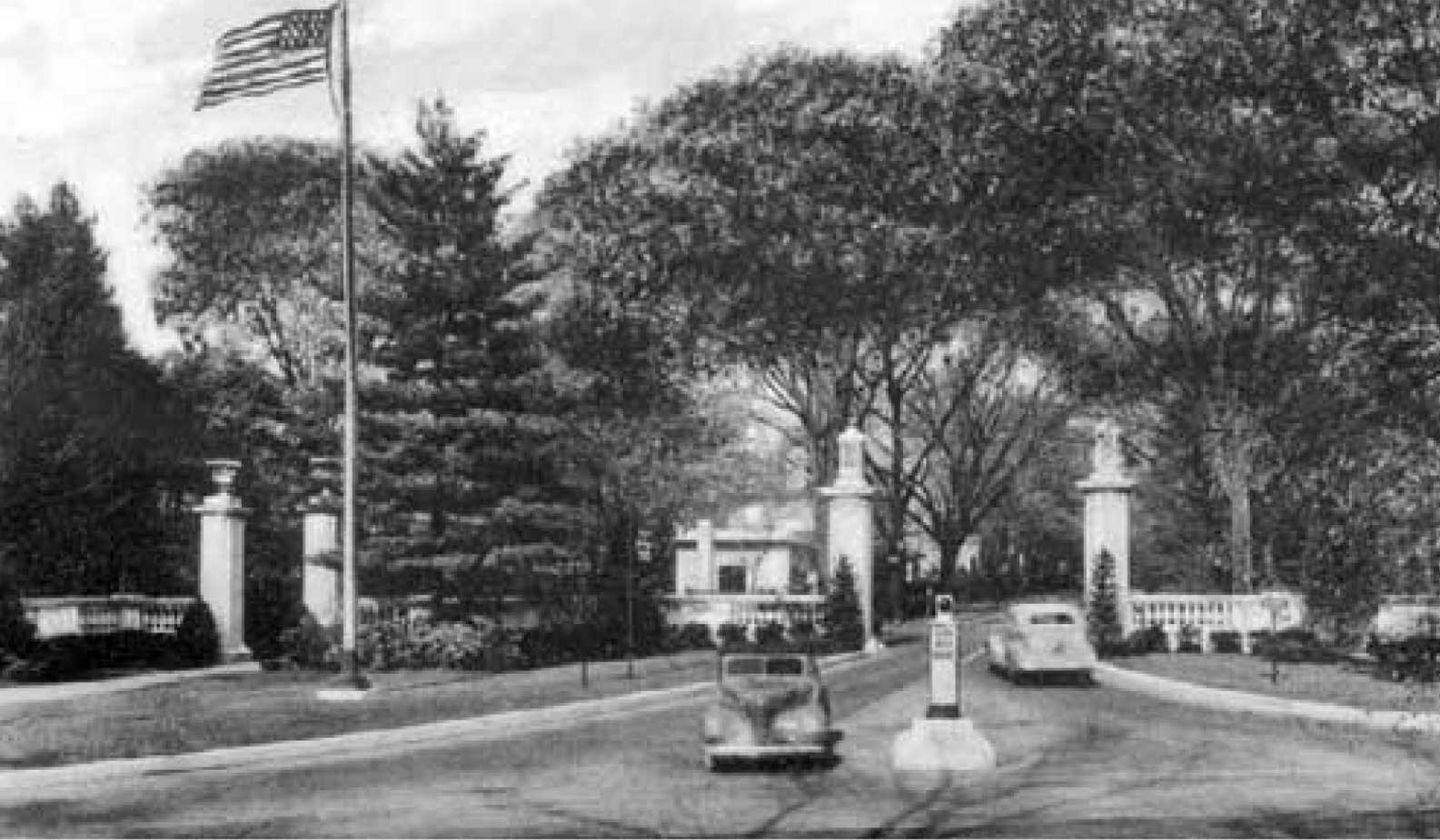 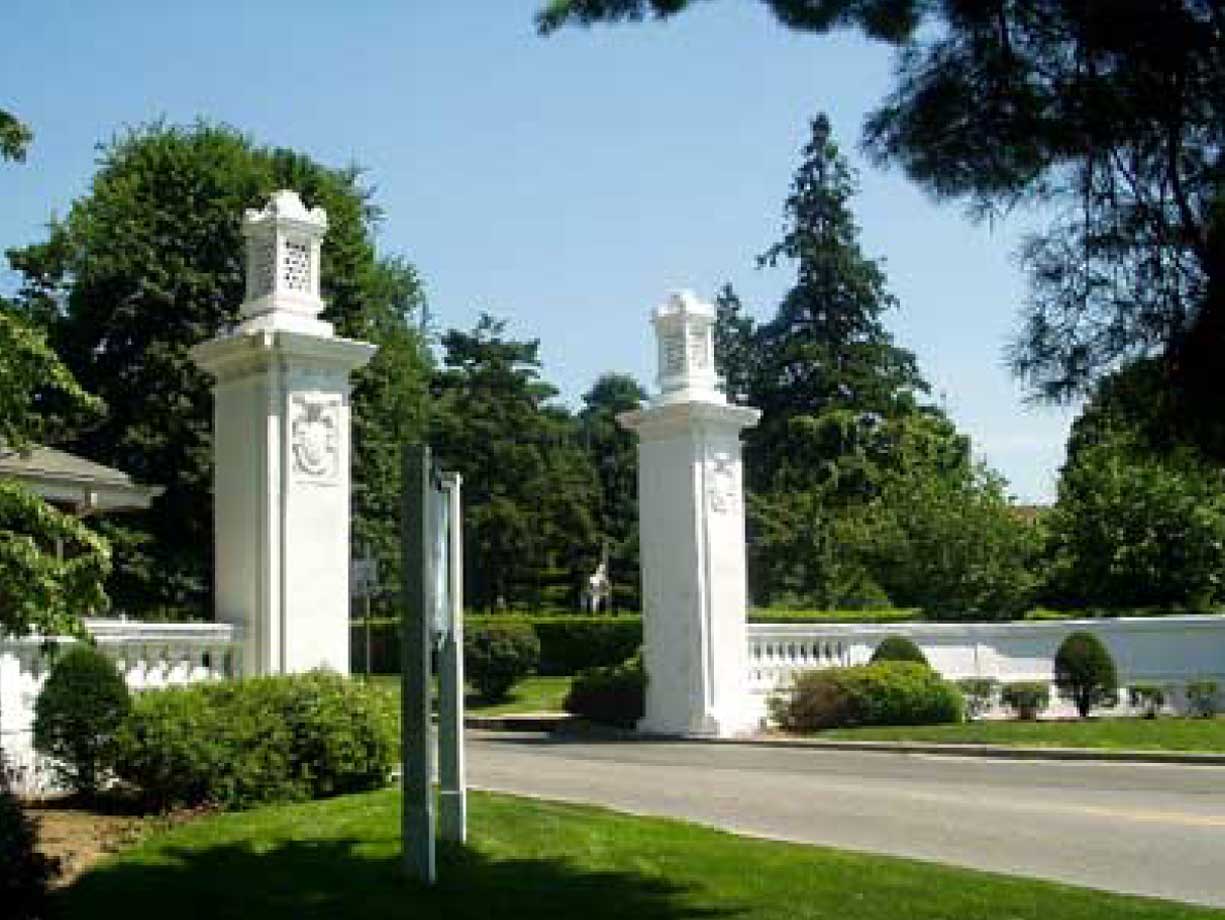 By 1916, 44 houses had been built on 155 acres. The sales literature read, “Colonial, English, and Italian, and an unusually high standard of architecture, all evidencing the combination of simplicity, restraint, and careful handling of proportions so requisite in successful architecture.”

In August 1915 the waterfront park was deeded to the Kensington Association. This included a 500 foot sand beach, boat dock, tennis courts, miniature lakes, and one of the largest fresh water swimming pools in the U.S.

On November 7, 1921, by a unanimous vote of the residents, Kensington became an incorporated village. The first elections for officers and trustees were held on November 28, 1921, with Byron Eldred unanimously elected as its first Mayor.